Many students or Mac users may need a different operating system on their laptops for their works. VMware Fusion 11 resolves the problem and will give you the best of both worlds. With just a few clicks you will be able to run multiple operating systems on your laptops. You might think about how it’s possible so, in this VMware Fusion review, we are going to discuss everything. Let’s start with the question

What is VMware Fusion?

VMware Fusion is virtualization software that allows Mac users to run Windows and multiple other operating systems side by side with Mac application, without formatting.

If you have a Mac operating system and want to run Windows, Linux or other operating-system simultaneously than VMware Fusion lets you do work at the same time without rebooting your software. Once you purchase VMware Fusion software you can use it endlessly. Fusion is simple enough for home users and for IT professionals, developers and business remains the best choice for virtualization on Mac.

The release date of VMware Fusion 11 was on 25 of September 2018 with an updated user interface and application menu. Now, with VMware Fusion review let’s explore some of their features, pricing, and pros & cons. 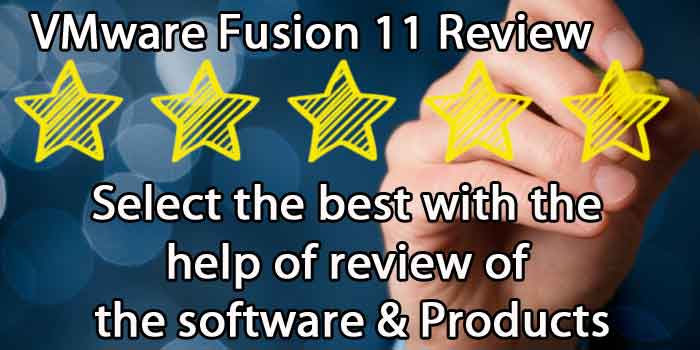 VMware Fusion lets us choose hundreds of operating systems, from lesser-known Linux to the latest Windows 10, to run together with the latest macOS release. With the latest update, Fusion now has added support for the striking Dark Mode and Sidecar feature.

When Dark Mode is enabled in our Mac, Fusion revamps into a darker and more nighttime-friendly version of itself. While with Sidecar you can drive Windows from your iPad in full screen just as if it were a second display, including support for the keyboard, Apple Pencil.

There is good news for those who wish to play 3D games in a virtual machine. VMware Fusion 11 supports 3D hardware-accelerated graphics that allow users to play games that require DirectX 10.1 and OpenGL 3.3 in a virtual environment.

So that you can run Windows app just like Mac, there is a Unity view mode in Fusion which hides the Window desktop. You can launch Window app directly from Dock, Spotlight or Launchpad. Once the app is launched you can watch in Expose, Spaces and Mission Control just as if they were Mac apps.

Virtual machine software comes in two versions: Basic and Pro. The price of basic version i.e. VMware Fusion 11 is $79.99 which includes VMware Fusion license and eligibility to upgrade with the next major release. Users also get 18-month e-mail support after registration.

If you already have an old version of VMware fusion 8.5 or greater than upgrading to a new version will cost you as low as $49.99. You can also make use of the VMware Fusion Promo Code to grab a discount and save some bucks.

Fusion Pro can cost $159.99 because of its additional features such as the capability to create linked clones, reliable VM encryption, vSphere connection and more. The upgrading price from the previous version to VMware Fusion Pro is $119.99.

Before executing a license, users can use VMware Fusion for 30 days of free trial and experience every feature that the virtual machine is providing. After the use of free trial, users can easily decide whether this software and its features fit their needs.

Cons: Ugly side of VMware Fusion 11

If you happen to find any kind of technical issue while using VMware Fusion 11, the best way to find the solution is by visiting Fusion Support Center. There you’ll find a search bar, where you can search your queries and get the answer in the knowledge-based articles. A lot of FAQs are provided, you can also read the guides, or get support by registering into your My VMware account.